Dutch people still consume insufficient fruit, vegetables, fish and fibre. Improvement of the type of fat in the diet by the reduction of trans fatty acids in foods is a favourable development. However, the proportion of saturated fatty acids in the diet is still high and overweight is common.Some people have intakes below the recommended amounts for some vitamins and minerals, such as vitamins A, B1, C, E, magnesium, potassium and zinc. More information on the possible health effects of these low intakes is desirable. Furthermore, age groups with specific higher intake requirements often do not meet these, i.e. concerning folate, vitamin D, iron and calcium.

A healthy dietary pattern is important to prevent obesity and chronic diseases. The survey provides insight into food consumption which can be used to stimulate healthier dietary patterns. This can be achieved by changes in both the food supply and consumer behaviour.

The last survey that included information on food consumption in the Dutch population was conducted in 1997/1998. The recent survey (2007-2010) provides more detailed information. The data from this survey can be used to support policy regarding healthy and safe foods,for improving food supply and in food education and research.

In total, 5502 persons in the age of 7 to 69 years were invited to participate in the study. A complete data set is available for 3819 respondents (69%), including a completed questionnaire and two 24-hour dietary recalls per person.

The participants formed a representative group of children and adults in the Netherlands in terms of socio-demographic factors, such as educational level of the head of household, region and population density. By age-gender group about 350 respondents were included in the survey. In this study design children were overrepresented and adults were underrepresented. The interviews were almost equally spread over the days of the week and seasons. However, to correct for small deviations from the general population, the results were weighted for age, sex, educational level (for children that of their parents or carers), region, degree of urbanisation, day of the week and season.

Most food groups were more likely to be consumed by adult men than by adult women (aged 19 to 69 years). However, food groups ‘fruit and nuts’ and ‘nonalcoholic beverages’ were more likely to be consumed by women than by men. The consumption of basic foods, that are mentioned in the food based dietary guidelines was low. For example, bread, potatoes, dairy products or spreads and oils.

Consumption of vegetables, fruit and fish

The percentage of the population that met the recommended amount of vegetables, fruit and fish 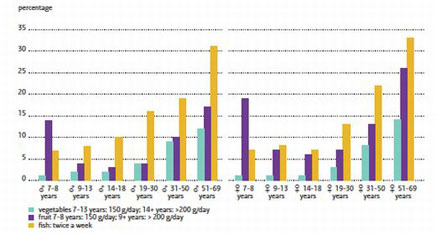 The food based recommendation to consume fish twice a week was not met by the majority of the study population. In a considerable part of the population, 28-65% (depending on the age group), fish is on the menu once a week.

Overweight and obesity is common and increased with age (15% among the Dutch male adolescents to 68% among male adults over 50).

Fat was responsible for one third of the energy supply, carbohydrates for about 50% and protein for about one seventh part. Compared to the Dutch National Food Consumption Survey-Young adults in 2003 the type of dietary fat improved. The intake of trans fatty acids favourably decreased due to a decline in levels of industrial trans fatty acids from partially hydrogenated vegetable oils in foods. The upper bound of 1% of energy from trans fatty acids was only exceeded by about 1 to 5% (depending on the age gender group) of the population. The intake of saturated fatty acids was too high for the majority of the population, over 85% exceeded the upper bound of 10 En%. Dietary fibre intake was far below the recommended amount.

Some people have intakes below the recommended amounts for some vitamins and minerals, such as vitamins A, B1, C, E, magnesium, potassium and zinc. More information on the possible health effects of these low intakes is desirable.
Furthermore, age groups with specific higher intake requirements often do not meet these, i.e. concerning folate (for women with a pregnancy wish), vitamin D (people above 50), iron (women of childbearing age) and calcium (adolescents). This observation underlines the advice of the Health Council of the Netherlands to these specific groups with regard to the use of folate and vitamin D supplements. The effects on health of low iron and calcium intakes are unclear; more research is needed in this area.

Except for women over 50, this use of supplements was not in line with the underlying principle of the Health Council, that a diet in accordance with the Guidelines for a Healthy Diet supplies enough micronutrients for the general population. However, two thirds of women over the age of 50 did not take the recommended vitamin D supplementation for the prevention of osteoporosis and osteomalacia.

Percentage dietary supplement users in the Dutch population aged 7 to 69 years (DNFCS 2007-2010), weighted for socio-demographic factors, season and day of the week (n=3,819)

Three quarters of the population consumed fortified products, like dairy products, margarines, syrups and non-alcoholic beverages, with the highest percentages in the youngest age groups. Fortified foods contributed mainly to the intake of B-vitamins and vitamin C.

Average contribution (%) of basic foods, fortified foods (with specific nutrients) and dietary supplements to nutrient intake of the Dutch population aged 7 to 69 years (DNFCS 2007-2010), weighted for socio-demographic factors, season and day of the week (n=3,819) 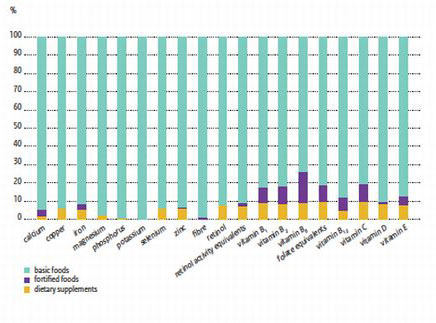 Despite differences in salt consumption between men, women and children, the sources of salt are similar. Dinner contributes most to salt intake (36%), followed by lunch (31%). The most important sources of salt at dinner, excluding discretionary table salt, are sauces and meat products. At lunch and breakfast, bread and cheese are the most important contributors of salt consumption. In between meals, the main sources are biscuits and cakes. Most salt from foods is consumed at home (69%). Consumers with a high salt intake consume relatively more foods. In addition, they consume foods with higher salt levels compared to those with the lowest salt intake.

Iodine is a natural component of foods like dairy products and non-alcoholic beverages (e.g. water, coffee and tea, fruit juices, soft drinks). Additionally, bread is an important source of iodine because it contains iodized salt. Apart from bread, for some years, iodized salt may be added to other food groups such as bread substitutes, processed meat, and kitchen salt. Since 2008, it has been permitted to add iodized salt to almost all processed foods. At that time, however, the maximum level of iodine in salt was reduced to prevent a too high iodine intake. But in practice, food producers added iodized salt less frequently than expected. This explains the decrease in iodine intake compared to the situation prior to 2008.

Decrease of salt and iodine intake

One aim of the VWS Ministry is to reduce the intake of salt in the population in the Netherlands. As a consequence, the consumption of iodized salt – which is an important source of iodine – will also decrease. This emphasizes the importance of monitoring the iodine intake in the Dutch population. If the iodine intake looks as if it is becoming deficient, then measures can be taken to boost the  supply of iodine. For instance, food producers can be stimulated to use more iodized salt or the level of iodine in salt can be increased.

Participants were drawn from representative consumer panels of the market research agency GfK. These persons participated in all types of studies and were not selected on the basis of dietary characteristics. The study participants were not involved in any other type of food consumption survey during the previous four years.

The market research agency invited selected persons either by post or email to participate in the study. Those who agreed to participate were sent by post or email the link to the GfK website and the general questionnaire. Specific questionnaires were sent to each of the age groups 7 to 11 year olds (in Dutch), 12 to 18 year olds (in Dutch) and adults (in Dutch). Contact with children between the ages 7 to 15 years was made initially through their parents or carers.

Participants aged 16 to 69 years were interviewed by telephone by a trained dietician, on two separate days and at times unknown to the participants. The interview was about the the day before the interview (24-hour recall).

The two 24-hour food recalls for children between the ages of 7 and 15 years were complied by means of face-to-face interviews during home visits. The child’s parents were also present during this interview. The interviewing dietician made an appointment for this interview.

Each person was interviewed twice with the interval of about four weeks between the interviews. The aim was to ensure that all recalled days of the weeks are equally represented.

The dietary assessment was based on two 24-hour food recalls. The 24-hour period started in the morning on the day of the 24-hour recall and continued until the following day when the person gets up (the day on which the interview is held). Food consumption on Saturday was recorded on the following Monday.

The dieticians used computer controlled interview software (EPIC-Soft®, IARC) with which answers are directly entered in the computer.

The food consumption interviews with EPIC-Soft comprises the following steps:

For correct evaluation of the food intake with regard to nutrition standards, not average intake over two days but the intake over a longer period (habitual intake) is important. The habitual intake was estimated from the reported intake.

The target population comprised all men and women living in the Netherlands between the ages of 7 and 69 years regardless of nationality, with the exception of pregnant and lactating women, people who were institutionalised and those without adequate command of the Dutch language. The study population adequately represented the Dutch population as a whole.

Over a three-year period, general information and food consumption data were collected from 3800 people. The survey population was divided into age groups as follows: 7 to 8 years, 9 to 13 years, 14 to 18 years, 19 to 30 years, 31 to 51 years, and 51 to 69 years. These age groups are in line with those used by the Health Council of the Netherlands for guidelines on a healthy diet.
The survey population was representative with regard to age and sex within each age group, region, degree of urbanisation and education (for children up to 18 years, by the educational level of their parents/carers).

The DNFCS-Core Survey aims to obtain data on the food consumption of men and women aged 7 to 69 years especially with regard to the consumption of fruit, vegetables and fish, energy intake and the fatty acid profile of the diet.

RIVM Centre for Nutrition and Health

More information on the methods and results of DNFCS-Core Survey can be found in the report, detailed results and list of publications.