Specifically for all older adults a high requirement of vitamin D is set, to reduce the risk of falling and fractures. In this survey population the intake of vitamin D is clearly inadequate. About 25% of the women and 20% of the men used dietary supplements containing vitamin D. Too low vitamin D intake is in particular a problem for those older adults that hardly come outside.

Older adults cannot be considered as a single homogeneous group. Older adults with functional impairments and multimorbidity were not represented adequately in this study. The older adults with the least functionality had a lower intake of energy, protein and many dietary components as compared to well-functioning older adults. This underpins the problem of undernutrition among some older adults.

Monitoring the diet and supplement use of older adults can contribute to adequate food policies and recommendations. Given the increasing population of older adults in the next decades it is recommended not to wait too long to collect new food consumption data. New data collection should include representative groups of older adults that are most at risk of acquiring nutritional problems.

Of the 3,138 persons aged 70 years and older were invited to participate in the study. 9% was indicated as non-eligible. Of the remaining 2,848 eligible older adults 17% did not respond and 57% refused to participate. From 739 older adults (26%) a complete and applicable set of information was received: a completed questionnaire, anthropometric data and results of two 24-hour dietary recalls.

The results indicated that the older adults in the Dutch Food Consumption Survey-Older adults were in better health and appeared to have less cognitive and physical impairments than the general Dutch community-dwelling older adults. Furthermore, a smaller proportion of the women had a body mass index ≥30 kg/m2. The study population thus represents a relatively more vital population of older adults.

The majority of the survey population reported one or more chronic diseases.
Undernutrition according to the screening instrument SNAQ 65+ (Short Nutritional Assessment Questionnaire 65+) was present in one in eight older adults. A BMI below 30kg/m2 was observed in a small proportion of the community-dwelling older adults (about 1%), while 20% of the study population had a BMI of 30kg/m2 or more.
More men (82%) than women (66%) went outside on a daily base and most participants were moderately activ during 30 minutes during five days or more per week.

Overall older men on average consumed more or simular amounts compared to older women, although the mean consumption of fruit and beverages was higher for women. Consumption of basic foods, recommended according to the Dutch food dietary guidelines, was low. This applied for bread, potatoes/rice/pasta, dairy foods and spreads and cooking fats.
Community-dwelling elderly consumed most foods at home, for many food groups this was the case for over 90% of the consumption.

Fish
At least 40% of the older adults didn’t consume oily fish on a weekly basis, such as recommended.

Habitual consumption of fish, fruit and vegetables and the % below recommendation

Beverages
The mean consumption of beverages (1.4 litre) was just below the recommended 1.5 to 2 litre per day.

Average energy intake was slightly below the average requirement for this group of relatively vital older adults. This might be explained by an underestimation of energy intake. Protein intake was sufficient for the majority in this population. On average, total carbohydrate intake was below the reference intake range and total fat intake was just within the reference intake range for sedentary populations. With regard to the fatty acid composition of the diet, intake of trans-fatty acids, linoleic acid and alpha-linolenic acid was appropriate, whereas the intake of saturated fatty acids was too high and intake of n-3 fish fatty acids was low. These suboptimal macronutrient intakes are similar to what was observed for adults below the age of 70.
Moreover, for one fifth of the women and two-fifths of the men, alcohol intake was too high. In addition, intake of dietary fibre was much lower than recommended.

The most important sources of energy were cereals (including bread), dairy products and meat. About 18% of total energy intake was derived from non-basic foods such as ‘sugar and confectionary’, ‘cakes’ and ‘non-alcoholic beverages’. These results correspond to the results of 7-69 year olds.
With the exception of alcohol, about 90% of macronutrient intake took place at home. On average 27% of energy intake was consumed in between main meals. 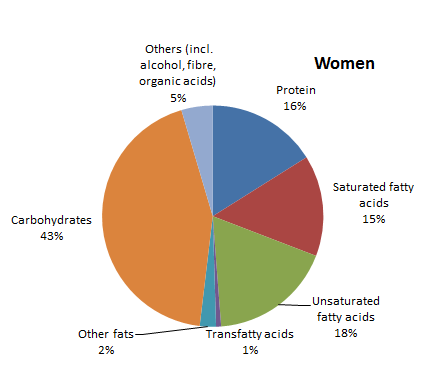 One in four Dutch women and one in five men over the age of 70 complied with the recommendation to take vitamin D supplements. A small part of the older adults ( Possibly about 10% was inadequate in selenium intake, while no statement can be made about the adequacy of intake of calcium, potassium, and (for men only) magnesium. The intake of other mineral and trace element intake was sufficient.
Sodium and salt intake was too high especially in men. There are no indications for excessive high intakes of other minerals and trace elements.

45% of the survey group used dietary supplements, 52% of the women, 36% of the men. Dietary supplements were more often consumed in the winter (45%) than during the rest of the year (38%). Multi vitamin/multi mineral supplements were used most often.
The recommendation for elderly to take dietary supplements with vitamin D was followed during winter months by one third of the women and one fifth of the men. During the rest of the year these percentages were lower: 27% versus 18%.
About 70% of the older adults consumed fortified foods, especially fortified margarines. About one fifth of yoghurt products, one third of syrups en a quarter of fruit and vegetable containing drinks were fortified. These products were used on about 7% of the consumption days.
Overall, fortified foods and dietary supplements contributed more to the intake of vitamins than to the intake of minerals.

*Iodine of added salt not included

The participants received written information on the survey, with the message that a project co-operator should contact them within a few days, to give further information. If the invited person was willing and able to participate, further appointments were made and requisite booklets were given.

The fieldwork has been carried out by specially trained dietitcians. As much as possible, all contacts with the participants were made by the same person.

Participants were called by the dietician prior to the first registration day in order to remember them when, and if necessary how, to fill in the food diary and as a confirmation of the appointment for the 24-hour recall.

The study consisted of two home visits. During these home visits some general questions were asked and the food consumption of the previous day was recalled. In order to facilitate this recall, participants were asked to fill in a food diary on an agreed day. Below a brief description is given for the several components of the survey.

During the first home visit:

During the second home visit:

Each person was interviewed twice, with an interval of about four week. The aim was to ensure that all recalled days of the weeks are equally represented.

The dietary assessment is based on two 24-hour food recalls. The 24-hour period starts in the morning on the day of the 24-hour recall and continues until the following day when the person gets up (the day on which the interview is held).

The dieticians used computer controlled interview software (EPIC-Soft®, IARC) with which answers are directly entered in the computer.

The interviews with EPIC-Soft comprises the following steps:

For correct evaluation of the food intake with regard to nutrition standards, not average intake over two days but the intake over a longer period (habitual intake) is important. The habitual intake was estimated from the reported intake, using SPADE (Statistical Program to Assess Dietary Exposure).

The target population comprised all community-dwelling men and women in the Netherlands aged 70 years and older regardless of nationality. This concerns about 10% of the Dutch population. Excluded were those who are institutionalised, have an insufficient command of the Dutch language, are terminally ill, tube or parenterally fed, need a high level of care, or are inable to complete this study. However, participation is allowed with help of a proxy person (e.g. partner, carer). The study population should adequately represent this community-dwelling part of the Dutch population.
General information and food consumption data were collected from 720 people: 360 men and 360 women scattered over 15 municipalities in the Netherlands, distributed to geographic region and address density. The survey population was drawn from the population register within each municipality.

DNFCS-Older adults aimsed to obtain data on food consumption and intake of energy and nutrients in the community-dwelling elderly population aged 70 years and older. Particular regard is given to the intake of vegetables, fruit, fish and fluids and the percentage of elderly that complies with the recommendation on energy, vitamin B2, B6, B12, C and D, folic acid, folate and calcium.

More information on the methods and results of DNFCS-Older adults can be found in the report, detailed results and list of publications.